In 2019, Swansea Police Officer Jason Tutterow volunteered to become the next School Resource Officer (SRO) for the Village of Swansea.  In January of 2020, Officer Tutterow took over that position where he serves the High Mount and Wolf Branch School Districts as well as the Elite Scholars STEAM Academy.

The primary purpose of the Swansea SRO is to insure a safe learning and working environment for all students and staff.  He accomplishes this through his presence, through communication and coordination with teachers and staff, by conducting safety drills and inspections, and through interaction and instruction with students on safety matters and threats.   However, there is a lot more to being an SRO.

An SRO helps to foster positive relations and partnerships between law enforcement and school employees, students and their families, and the community.  SRO Tutterow will also assist the students by providing law related learning opportunities and helping to empower them to achieve their best through mentorship and informal counseling.  SRO Tutterow is also a good resource for faculty and families for law related questions or issues and will help build trust within the community through outreach and relations with the students.  The SRO does not assist in disciplining students.

SRO Tutterow was raised in Wood River Illinois, a short drive north of Swansea.  He enlisted in the Marine Corps in 1993 through the delayed entry program as a junior in high school.  He left home in the summer of 1994 just after graduating, and served for four years as a military police officer.  After returning home, SRO Tutterow worked in security and put himself through college at Lewis and Clark College in Godfrey IL earning his degree in criminal justice.

SRO Tutterow started with the Swansea Police Department in January of 2005.  He focused strongly on DUI arrests, eventually earning his 200 DUI arrest pin.  He took part in the St. Clair County Gang Suppression Task Force, and he took over the position of Evidence Officer in June of 2012.  While Evidence Officer, SRO Tutterow created and implemented the use of a property database that drastically improved efficiency and reliability in the property room.  Within four years, Officer Tutterow added over 10,000 items to the database, which is still the primary method of property management today.

Officer Tutterow volunteered with the Cub Scouts for 7 years where he served as the Cub Master.  When he learned about the SRO position, SRO Tutterow recognized it as his opportunity to continue to help influence and mentor future generations, and he carried over his love of working with children when he volunteered for it.

In the summer of 2022, Officer Tutterow became the handler for the first Swansea Police Department Community Wellness and Comfort Dog, Hamilton.  If you see SRO Tutterow, Hamilton is almost guaranteed to be nearby, if not at his side. Both students and staff instantly fell in love with Hamilton.   Hamilton helps SRO Tutterow with the students by making him more approachable, helping to calm the students in crisis, and being an overall comfort and source of joy. 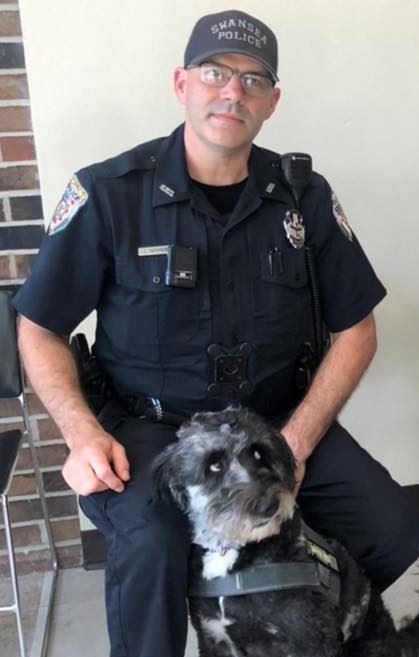